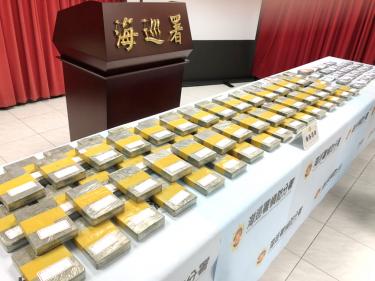 seizure of 76 bricks of heroin, based on surveillance by the Coast Guard Administration (CGA) of a Thailand-based smuggling ring, Criminal Investigation Bureau officials announced yesterday.

Raids of sites in Wugu District (五股) led to the confiscation of 29kg of heroin with an estimated street value of NT$150 million (US$4.86 million) and NT$2.42 million in cash, said Chen Tso-lin (陳佐霖), deputy chief of a squad at the bureau’s Drug Enforcement Center, at a news conference at the CGA’s headquarters in Taipei.

One of the suspects is a 56-year-old Taiwanese man, surnamed Kao (高), whose import-export business in Thailand had fallen on hard times, while the second is a 38-year-old Thai national known as Sreenak, who entered Taiwan on a tourist visa in October last year, Chen said.

Kao’s company was heavily in debt and a local drug syndicate, interested in establishing more contacts in Taiwan, had reportedly recruited him with the promise of a big payday upon a successful smuggling run, Chen said.    [FULL  STORY]