A QUESTION OF CHARACTER(S): A calligrapher says the design for ‘Taiwan’ on a poster and stickers for a festival is very similar to characters that he designed 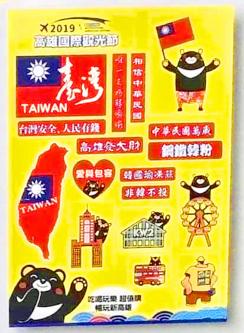 A poster promoting the International Kaohsiung Festival is pictured in Kaohsiung on Sunday. The allegedly plagiarized calligraphy for &ldquo;Taiwan&rdquo; is within the national flag on the top left of the poster.
Photo: Wang Jung-hsiang, Taipei Times

promotions for this year’s International Kaohsiung Festival without his permission.

A Facebook user named Y.C. Lin who manages a “Yu’s Calligraphy” page on Sunday appeared to accuse festival organizers of plagiarizing the characters for “Taiwan” (臺灣) that he had drawn.

Photographs shared by Lin appear to show similar characters in a sticker set and poster promoting the festival.

It is not the first time Kaohsiung Mayor Han Kuo-yu’s (韓國瑜) administration has been accused of plagiarism, said Lee Hsin-han (李欣翰), director of the Taiwan Radical Wings party’s Kaohsiung chapter.

Han has “avoided the issue” in previous instances by saying they were the “unprompted behavior of [his] supporters” and that conversations should not revolve around “small, technical issues,” Lee said.    [FULL  STORY]