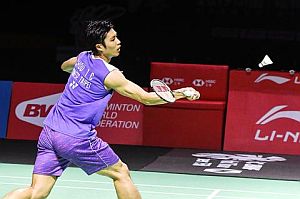 Chou Tien-chen of Taiwan returns to Kento Momota of Japan during their men&rsquo;s singles final at the Fuzhou China Open yesterday.
Photo: AFP

The 29-year-old Chou is in the unusual position of not having a coach and instead relies on his longtime physio to guide him courtside during matches.    [FULL  STORY]