DEFENDING TAIWAN: DPP supporters are concerned that losing the presidency and a number of legislative seats would put the nation’s sovereignty at risk, William Lai said 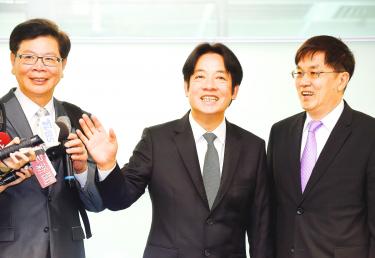 Progressive Party’s (DPP) presidential primary, saying that he could shoulder the responsibility of leading Taiwan in defending itself.

Lai, who stepped down as premier in January following the party’s losses in the nine-in-one elections on Nov. 24 last year, said that calls from grassroots DPP supporters led him to contend for the party’s nomination.

The DPP would find itself in an even more precarious position in next year’s presidential election than in the 2008 race, particularly after the party’s heavy losses in the local elections, Lai said.

DPP supporters are concerned that losing the presidency and a number of legislative seats would put the nation’s sovereignty and democracy at risk, he said.  [FULL  STORY]