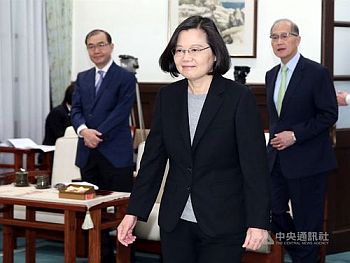 is president, Taiwan will not accept the ‘one country, two systems’ formula devised by China because it seeks to annex Taiwan and place it under the control of Beijing.

Tsai made the statement in a Facebook post commemorating the fifth anniversary of the Sunflower Student Movement, a 23-day student-led occupation of Taiwan’s parliament that began on March 18, 2014 to protest against a trade-in-services agreement with China.

“As long as I am president, the ‘one country, two systems’ formula will not be accepted,” Tsai said.

Tsai also said she will register this week for the Democratic Progressive Party (DPP) primary for the 2020 presidential election.    [FULL  STORY]