MESSAGE OF MISUNDERSTANDING: Italy confirmed its adherence to ‘the policy of a single China,’ but CCTV’s translation said Rome said it followed the ‘one China’ principle 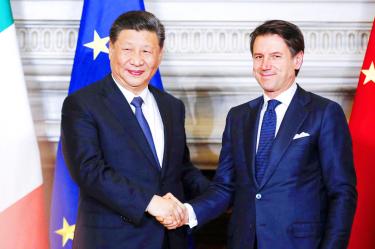 Chinese President Xi Jinping, left, shakes hands with Italian Prime Minister Giuseppe Conte at the Villa Madama in Rome on Saturday ahead of the signing of several memorandums of understanding.  Photo: EPA-EFE

mislead the world by purposefully confusing the “policy of a single China” mentioned in the joint communique signed by Italy and China on Saturday with Beijing’s “one China” principle.

The communique was issued during Chinese President Xi Jinping’s (習近平) visit to Rome, and Italy simply reiterated its conformity to the “one China” policy followed by the EU, the ministry said said in a press release.

“However, Chinese media deliberately translated the [Italian for] ‘one China’ policy into Beijing’s frequently cited ‘one China’ principle in an apparent attempt to confuse the international community and to unilaterally distort policy discourse about the ‘status quo’ across the Taiwan Strait,” it said.

It said such a move is reprehensible and not conducive to cross-strait relations or the maintenance of peace and stability in the region.    [FULL  STORY]