PROTECTED SPECIES: Many cases of illegal treatment of wildlife were reported by members of the public, showing that conservation awareness has improved 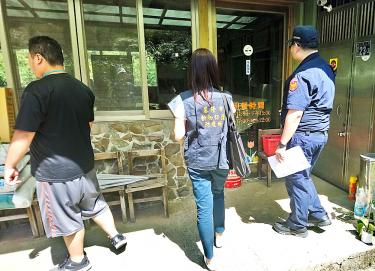 An inspector from the Keelung Animal Protection and Health Inspection Office and a police officer inspect a restaurant in Keelung as part of a nationwide sweep in an undated photograph.
Photo: Chien Hui-ju, Taipei Times, courtesy of the Forestry Bureau

nationwide sweep, the Forestry Bureau said yesterday, adding that the sale of all ivory products would be banned from January next year.

A task force comprised of officials from the bureau, local governments and the National Police Agency from July 1 to Sunday inspected 447 stores selling animals, wild foods, hardware and agricultural equipment.

Officials also cracked down on the unlawful use of snares, she said.    [FULL  STORY]