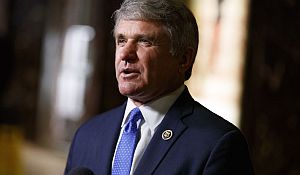 that Taiwan’s latest purchase of about $2 billion of U.S. weapons “sends a very strong message to China.”

Speaking to Fox News, the Texas Republican said “we’re going to arm Taiwan so she can defend herself from what’s become a very aggressive Chinese communist party right on the doorstep.”

The State Department earlier this week approved the sale of JAG1 missiles, Abrams tanks, and grenades to Taiwan, a self-ruled Democratic state, which sparked bitter criticism from the Chinese government and threats of sanctions.

The deal comes amid an ongoing trade war between the U.S. and China that has hit several U.S. tech companies and agricultural industries. Lawmakers and diplomats met with Taiwanese President Tsai Ing-wen last week, in a move that angered Beijing.    [FULL  STORY]