TAIPEI — Taiwan President Tsai Ing-wen flew out of New York on Saturday, after her highest-profile 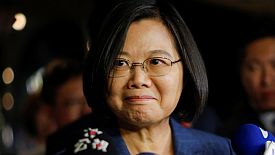 Taiwanese President Tsai Ing-wen speaks to media as she arrives for a VIP reception at the Hyatt hotel in New York, U.S. on Friday.   &copy; Reuters

She met members of the Taiwanese diaspora, and spoke at Columbia University — a rare honor for a visiting Taiwanese president. In her speech, she framed the existential threat that China poses to Taiwan as the front line of the global struggle between authoritarianism and democracy.

"Taiwan's survival is about more than just cross-strait relations," Tsai said. "We are a vital bastion of democracy in the Indo-Pacific, and the entire world is closely watching the precedent we will set for the future of democracy."

For most of the past 20 years, American administrations from both parties have kept the U.S.-Taiwan relationship in the background of their Asia policy. Since Tsai's congratulatory phone call to President-elect Donald Trump in late 2016, however, the relationship between Washington and Taipei has steadily warmed — and become much more open.    [FULL  STORY]