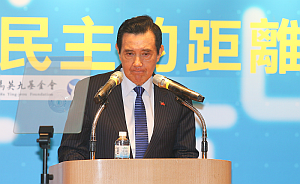 keynote address at a seminar hosted by the Fair Winds Foundation on the topic of the “Distance between Taiwan and Democracy” (台灣與民主的距離研討會).

In his keynote address, Ma railed at the Tsai administration, claiming it is “worse than the Hong Kong government,” and characterized the Democratic Progressive Party’s (DPP) governance as “trapping Taiwan in an unfree democracy.”

The former president especially criticized the Transitional Justice Commission (TJC) and the Ill-Gotten Party Assets Settlement Committee, claiming that they were designed as political tools used to damage the reputation of the Kuomintang (KMT).

Ma’s keynote and political attacks on the Tsai administration and the DPP comes just one day ahead of the KMT’s announcement of primary polling results.The announcement on Monday (July 15) should provide a clear indication of the party’s nominee to challenge incumbent Tsai Ing-wen (蔡英文) in the upcoming Presidential election.    [FULL  STORY]