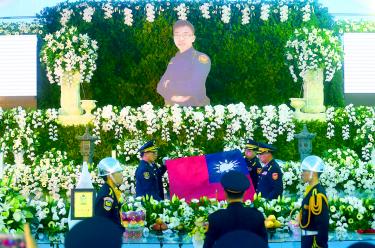 who was stabbed to death on July 3, as the Taiwan Railways Administration (TRA) announced that conductors and station staff would be given self-defense courses, and that pepper spray would be given to conductors.

All trains departing at 11:40am — when the pallbearers at Lee’s funeral service in Chiayi were scheduled to lift up his casket — blew their whistles for about three seconds in a salute to the slain officer.

Lee was stabbed during a confrontation with a Ziqiang Express (自強號) passenger who had refused to pay the full fare, leading the train’s conductor to call the bureau for assistance.

The incident led the TRA to open a review of the safety equipment carried by its onboard personnel.
[FULL  STORY]