THREE DEMANDS: People who benefit from high prices say that prices increase due to high demand, but in reality, many homes remain vacant, an academic said

Hundreds of residents yesterday gathered at a forum in downtown Taipei, where housing prices are the 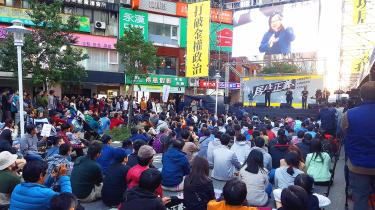 highest in the nation, to demand housing justice.

The forum, held by the Housing Right Reform Union, took place at a plaza near the intersection of Zhongxiao E Road and Dunhua S Road, where the Snails Without Shells movement was launched 30 years ago.

The forum called on the government to implement a “List Real Price 2.0” policy, levy taxes on people who hoard properties and step up efforts to build social housing.