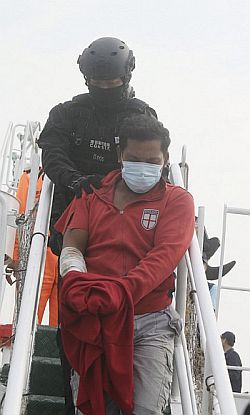 A Filipino crewman, on suspicion of killing another Filipino fisherman, has been detained for questioning. (CNA photo)

Taiwanese fishing boat and its crew in the Indian Ocean. That’s after a stabbing incident on the boat in February, which left one dead and seven missing.

The coast guard mission returned to Kaohsiung harbor in southern Taiwan on Monday, ending a journey that spanned nearly a month.

At the center of the case is a Taiwan-registered fishing boat called the Wen Peng. A Filipino crew member hijacked the boat on February 20 off the coast of Mauritius. At the time of the incident, the boat had a total of 24 people on board, including three Taiwanese, ten Filipinos and 11 Indonesians.

Authorities have arrested the Filipino crewman who hijacked the boat, on suspicion of killing another Filipino fisherman. He’s now back in Taiwan, and has been detained for questioning.

Vice Premier Chen Chi-mai spoke about the incident during a press conference in Kaohsiung on Monday. He said the government will do its best to ensure the safety of Taiwanese fishing boats and crew members operating on the high seas.
[FULL  STORY]