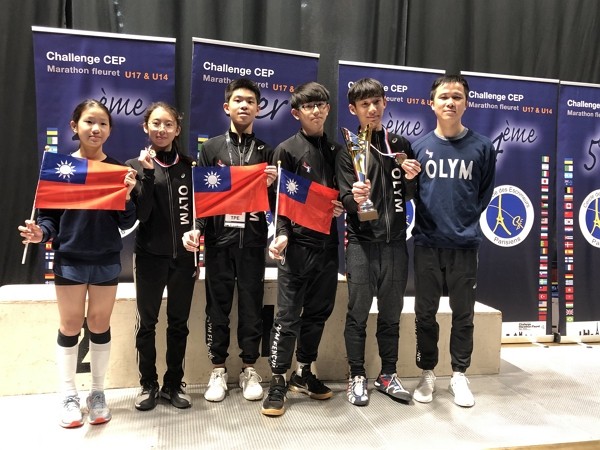 TAIPEI (Taiwan News) — Taiwan's teenage fencing team competed at the Challenge CEP Marathon Fleuret 2020 in Paris over the weekend and was able to secure second place in the male rankings and the fifth in the female.

On Saturday (Feb. 1) and Sunday (Feb. 2), Team Taiwan arrived at the French fencing competition, but coach Ou Feng-Ming (歐豐銘) and his contestants were surprised to find that no Taiwanese flags were present at the venue. After filing a complaint, the team grew even more frustrated when the event organizers chose to display the Chinese Taipei Olympic flag over Taiwan's national flag.

The young fencing contestants told CNA that they were disappointed at the absence of the Taiwanese flag and decided to talk to the event staff as they were rearranging the flags. Demetris Chen (陳宣豪), who is expected to graduate from Taipei Fuhsing Private Elementary School this June, said it made no sense that Taiwan could not unfurl its flag when all the other countries were displaying theirs.

Chen said that at first, the event staff could not understand his request since they did not speak English, but after explaining the situation with cell phone images, he was able to convey his meaning. When asked about possible pressure from Team China, the 12-year-old admitted he was a bit worried but that he had decided to follow his heart anyway.    [FULL  STORY]