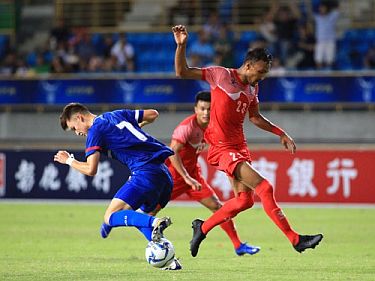 Taipei, Sept. 10 (CNA) Taiwan's national football team was crushed by Nepal Tuesday in its second game in the second round of qualifiers for the 2022 World Cup.

Taiwan, ranked 125th in the FIFA world rankings, was defeated by world 166th Nepal 2-0 at the Taipei Stadium in the second of a series of matches to be played to qualify for FIFA World Cup Qatar 2022.

After Thursday's 2-1 defeat to Jordan on home territory, the Taiwanese were thirsty for revenge and made repeated attacks led by forward Chen Hao-wei (陳浩瑋) on the Nepalese side.

However, Taiwan started showing signs of distress from early on in the match when midfielder Anjan Bista of Nepal scored the first goal just three minutes into the match.