MEMORABLE NIGHT: The 16th Taiwanese to play in the major leagues, belted his three-run homer in the sixth inning as Cleveland closed on the second wild-card spot

Chang Yu on Monday became the fourth Taiwanese to homer in the majors, but the 24-year-old 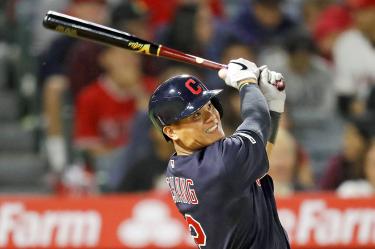 Taiwan&rsquo;s Chang Yu of the Cleveland Indians hits a three-run homer against the Los Angeles Angels in their American League game in Anaheim, California, on Monday.
Photo: AP

Chants of “Let’s go, Bieber” rolled out of the Angel Stadium stands before Shane Bieber had even thrown a pitch. The raucous cheers continued all night long and they culminated in that rarest of baseball honors: a curtain call for a visiting player.

Although the Indians were on the road, Bieber was at home — and the kid from Laguna Hills definitely pitched like it.