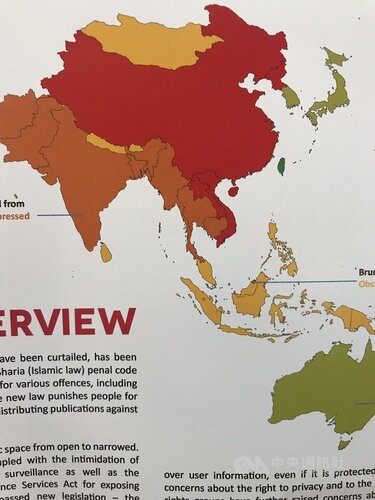 Bangkok, Dec. 4 (CNA) Taiwan has been rated as the only Asian country with open civic space, in a global report that rates and tracks respect for fundamental freedoms in 196 countries worldwide, according to the results released Wednesday in Bangkok.

The annual "People Power Under Attack" report, compiled by the South Africa-based non-governmental organization CIVICUS, ranked the 196 countries in five categories – open, narrowed, obstructed, repressed and closed — based on their level of basic freedoms, such as freedom of the press and of speech.

Taiwan was among the 43 countries worldwide, and the only one in Asia, ranked in the open category.

Of the 25 Asian countries listed in the report, four were rated as closed, namely China, North Korea, Vietnam and Laos, while eight were categorized as repressed, and 10 as obstructed. Civic space in South Korea and Japan was rated as narrowed.    [FULL  STORY]