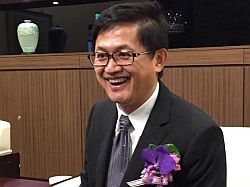 recruiting 1,800 workers for a new factory on the Indonesian island of Batam in order to avoid fallout from the trade war between China and the United States, reports said Friday (July 12).

The factory, which was officially opened on July 9, will produce non-iPhone items such as set-top boxes, wifi routers and smart devices for export to the U.S., and is Pegatron’s first manufacturing plant in Southeast Asia.

The company said it had so far invested US$10 milllion (NT$310 million) in the Batam project, but was not willing to comment on media reports the total amount would reach four times as much, the Central News Agency said.

Pegatron was reportedly also considering Vietnam as a production base, due to the presence of South Korea’s Samsung assembling smartphones in the north of the country. The Southeast Asian factories will allow Pegatron products to avoid U.S. tariffs targeting imports from China.6
[FULL  STORY]