London, March 19 (CNA) A Taiwanese jam maker won an Artisan Award for her 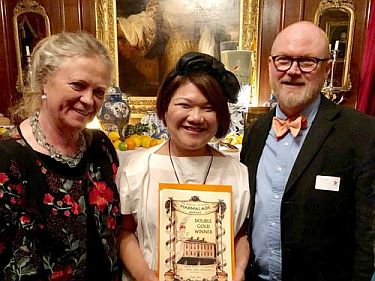 marmalade at an annual culinary event in England last Friday, after competing against more than 3,000 jars of preserves.

Ke Ya (柯亞), founder of Keya Jam, won a Double Gold award for her Orange Blossom, Kumquat & Yellow Lemon Marmalade in the artisan and small producer category, which included about 3,500 jams from over 40 countries at the 2019 World’s Original Marmalade Awards.

In an interview with CNA, Ke said that even though three marmalades won Double Gold awards, the others being from the Netherlands and Syria, hers was the only one to receive a full score of 20 from the judges.

The jury was made up of journalists, business leaders and people well respected in the food industry. Submissions were evaluated from mid February with the winners announced on March 15, according to the event’s website.    [FULL  STORY]