Ko fails to understand U.S. support and is moving closer to China: TAA 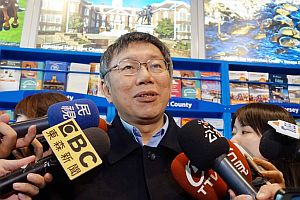 chairman of the American Institute in Taiwan (AIT) to complain about negative remarks by Taipei City Mayor Ko Wen-je (柯文哲) on relations between Taiwan and the United States.

The mayor is currently touring the U.S. in a move which is widely seen as a form of preparation for an eventual candidacy in the January 2020 presidential elections.

Ko has made negative comments about Taiwan-U.S. relations and has been moving closer to China, wrote Shawfang Jeng (鄭劭方), the president of the Taiwan Association of America.

Ko characterized the relationship with Washington as “transactional” and described military aid as a useless “flat drill bit,” the letter said.    [FULL  STORY]