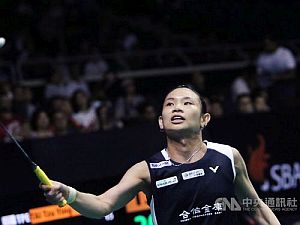 match against her opponent Tuesday in the women's singles of the 2019 Blibli Indonesia Open, a Super 1000 event on the HSBC BWF World Tour.

Tai, world No. 1 on the Badminton World Federation's (BWF) women's singles rankings since May 3 last year, beat Yeo Jia Min (楊佳敏) of Singapore 21-12, 21-18 in a quick match that lasted only 31 minutes.

She had just competed in the Singapore Open in April, winning the women's singles title against Nozomi Okuhara of Japan. Her other trophy this season also included the Malaysia Open, which took place in the same month.

Tai will next face world No. 23 Busanan Ongbamrungphan of Thailand in the second round of the tournament.    [FULL  STORY]