RAIN STILL EXPECTED: The Central Weather Bureau lifted the land alert for Danas as of 8:30pm yesterday. Most schools and offices nationwide are to be open today

Tropical Storm Danas’ threat to Taiwan proper appears to be diminishing, as its projected path is 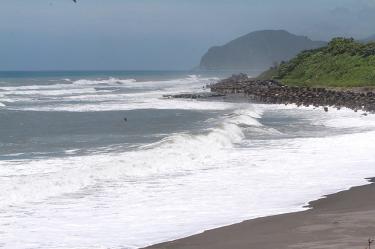 moving it away from the east coast, but the center and south of the island should brace for rain being brought by another low-pressure system, the Central Weather Bureau said yesterday.

The bureau issued sea alerts for Danas at 11:30pm on Tuesday and 11:30am yesterday.

It had previously forecast that the storm would make landfall on the southeast coast, move across the nation and proceed to China.

However, as of 7pm last night, Danas’ center was located 360km southeast of Pingtung County’s Oluanpi (鵝鑾鼻), and the storm, with a 150km radius, was moving northwest at 17kph.
[FULL  STORY]