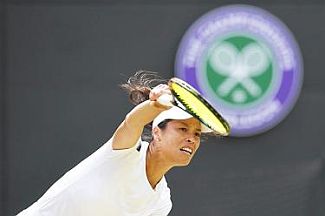 Hsieh Cheng-peng in mixed doubles at a Grand Slam event came to an abrupt end at Wimbledon on Monday.

Taiwan’s Latisha Chan and Ivan Dodig of Croatia easily toppled the Hsiehs in the second round of the mixed doubles 6-3, 6-2 in 66 minutes and are next to face 11th seeds Edouard Roger-Vasselin of France and Andreja Klepac of Slovenia.

Chan and Dodig have won the French Open mixed doubles the past two years and are seeded eighth at Wimbledon.

After winning their opening-round match, the Hsiehs said that they were playing together to have fun and were not worried about winning or losing, and Monday’s defeat actually came as something of a relief to the sister who has been active at this year’s Wimbledon.

She also reached the third round of the women’s singles before losing to third-seed Karolina Pliskova of the Czech Republic in a three-set match, and was to compete yesterday in women’s doubles.    [FULL  STORY]