President Tsai Ing-wen (蔡英文) held closed-door meetings and spoke with US officials, including 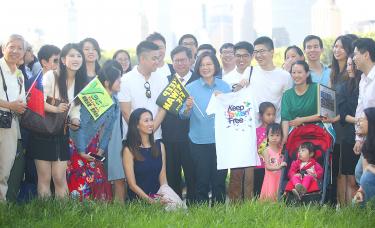 President Tsai Ing-wen, center, is presented with a T-shirt bearing the words &ldquo;Keep Taiwan free&rdquo; while going for a walk with Taiwanese students in New York&rsquo;s Central Park on Saturday.
Photo: CNA

having a teleconference with US House of Representatives Speaker Nancy Pelosi, during her layover in New York, National Security Council Deputy Secretary-General Tsai Ming-yen (蔡明彥) said.

Tsai Ming-yen made the remarks on the president’s chartered flight as the delegation left the US for Haiti on Saturday.

Tsai Ing-wen met American Institute in Taiwan Chairman James Moriarty soon after her arrival in the city on Thursday afternoon, and the following day met former US secretary of state Richard Armitage, before speaking with Pelosi on the telephone, he said.

The president expressed gratitude for the US’ and Pelosi’s support of Taiwan, including the US House of Representatives’ passage of the National Defense Authorization Act for Fiscal Year 2020 on Friday, which includes a section supporting continued US arms sales to Taiwan, Tsai Ming-yen said.    [FULL  STORY]