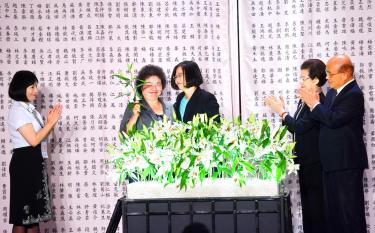 agencies to declassify major cases from the White Terror era as she presided over a ceremony in Taipei yesterday marking the exoneration of 2,006 political victims.

“We must strive to seek justice and restore historical truths,” she said at the event, which was organized by the Transitional Justice Commission to exonerate people persecuted during the White Terror era under the Chinese Nationalist Party’s (KMT) authoritarian rule.

The ceremony was held for people whose names were cleared by the commission on its third and fourth list of exoneration published on Feb. 27 and May 30.

Some of the victims attended the ceremony, while those who had died were represented by family members.    [FULL  STORY]