Estrangement between two sides is too profound, says Raymond Burghardt 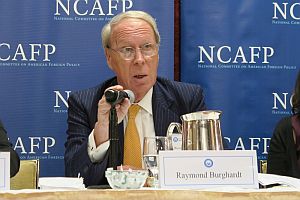 The former U.S. diplomat made the remarks at an event held by The National Committee on American Foreign Policy, on Monday (Dec. 2) in Washington. He was addressing cross-strait issues, reported Voice of America.

“It’s impossible to see a peaceful unification of Taiwan with China,” said Burghardt, citing profound estrangement between the two sides and a strong sense of a separate identity in Taiwan. “I think people in Beijing have realized that,” he added.

The question is now “what kind of coercion is necessary?” Burghardt stressed. He believes the Chinese government has been mulling a list of options, including disinformation and information warfare, as well as military means “if it has to go to the level.”    [FULL  STORY]