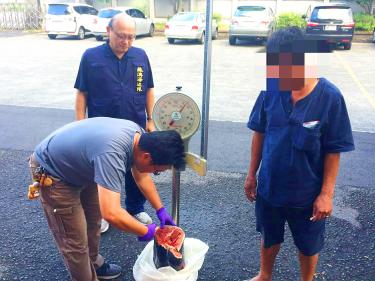 Guard Administration in Yilan County’s Suao Township (蘇澳) on Wednesday, even though hunting cetaceans has been banned for more than two decades, the Ocean Conservation Administration (OCA) said yesterday.

The Forestry Bureau, which previously managed protected species before transferring responsibility to the OCA, in 1995 listed all cetaceans as protected and banned hunting and trading in the animals, the OCA said.

On Wednesday afternoon, the Yilan County Government informed the OCA that Coast Guard Administration officials in Suao had stopped a driver surnamed Lin (林), who was delivering 449.5kg of meat seemingly cut from cetaceans, it said.

The Ministry of Justice’s Investigation Bureau is to perform DNA identification on the sampled meat, the OCA said.    [FULL  STORY]