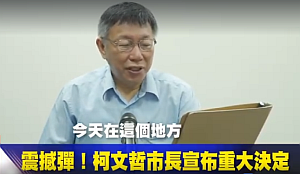 their presidential nominee as Kaohsiung Mayor Han Kuo-yu (韓國瑜) on Monday (July 15), Taipei Mayor and potential presidential challenger, Ko Wen-je (柯文哲), stated that he had a “huge announcement” to make as well.

Mayor Ko took to social media with a live event on Facebook on Tuesday that instantly drew the attention of thousands in Taiwan who are eager to know if and when Ko plans to enter the race for 2020.

However, despite asking for his followers support, many were disappointed because the “huge announcement” from the mayor was not related to the upcoming presidential election. Instead, Ko asked netizens to support Taipei’s official mascot, Bravo the Bear, in an upcoming competition to decide Taiwan’s favorite mascot.

The first ever Mascot Taiwan competition is taking place right now, and before July 26 people can vote on their favorite mascot in Taiwan on the official 2019 Mascot Taiwan website. In the major announcement today, Mayor Ko not only trolled thousands of his online followers, but he also emphasized that the best candidate in any race is a candidate with good ideas, ability, and one who contributes to the people’s happiness.    [FULL  STORY]