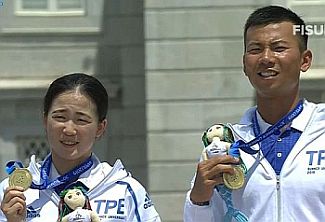 the gold medal after beating Japan 5-3 in the recurve mixed team final at the 2019 Summer Universiade in Naples on Saturday.

In the final, the Taiwanese duo and the Japanese team of Risa Horiguchi and Yuta Ishii were tied a 3-3 after three sets of four arrows per team.

With the competition the first to five points (with two points for winning a set, and one point for a tie), the next set could prove decisive, and Peng and Wei shot a nearly 39 (three 10s and one 9), edging out Japan's 38.

Their victory also marked the first archery gold for Taiwan at the 2019 Universiade in Naples.
[FULL  STORY]