‘CHALLENGE COMING’: Hsieh Su-wei is looking to win a second Wimbledon doubles title, while Latisha Chan and Ivan Dodig hope to extend their winning streak together 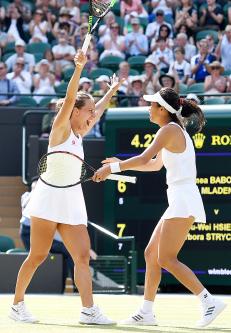 Hsieh Su-wei of Taiwan and Barbora Strycova of the Czech Republic celebrate defeating Timea Babos of Hungary and Kristina Mladenovic of France in the Wimbledon women&rsquo;s doubles semi-final in London on Friday.
Photo: EPA-EFE

career after she and Barbora Strycova of the Czech Republic overcame the top seeds, while compatriot Latisha Chan advanced to the finals of the mixed doubles.

They were to face another major challenge in the final yesterday against fourth seeds Gabriela Dabrowski of Canada and Xu Yifan of China.

The Canadian-Chinese duo have never won a Grand Slam women’s doubles title, but on Friday showed they are in top form with a convincing 6-1, 3-6, 6-3 win over second seeds Barbora Krejcikova and Katerina Siniakova of the Czech Republic.

Hsieh and Strycova have faced Dabrowski and Xu once this year, beating them 6-3, 6-1 on clay in Madrid in May.    [FULL  STORY]