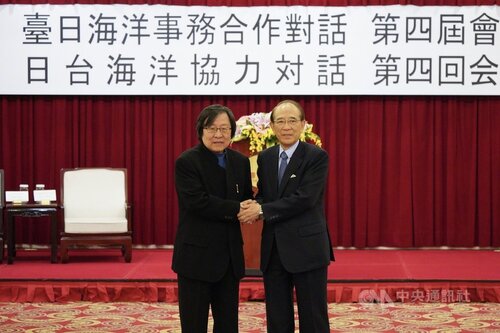 The fourth Taiwan-Japan dialogue on maritime affairs cooperation was held at the Grand Hotel and co-chaired by Chiou I-jen (邱義仁), head of the Taiwan-Japan Relations Association (TJRA), and Ohashi Mitsuo, Chairman of the Japan-Taiwan Exchange Association (JTEA).

The dialogue is one of the many cooperation mechanisms between Taiwan and Japan, which are built on friendship and trust over the years, to protect the interests of both the Taiwanese and Japanese people, Chiou said.

However, there are still issues that need to be ironed out, Chiou noted, adding that he hoped such issues could be resolved by respecting the basic positions of each country and through mutual understanding. He did not elaborate.    [FULL  STORY]